Every pet has its own “special needs.”  Some will only eat certain foods, others must be brushed first thing in the morning, some even want the television turned to Animal Planet when left alone!  But, some pets’ special needs are a little more obvious, such as being blind or deaf.  Having a special needs pet is a wonderful, rewarding experience, but may require some additional attention. 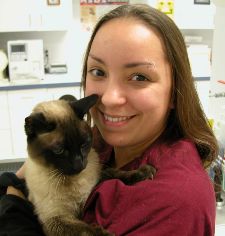 I adopted a 19 year old blind cat named Winston last summer.  I was a little wary because I had never owned, or even been around many blind pets before.  Winston had been blind for many years according to his previous owner.  I was extremely surprised how quickly and comfortably he acclimated to our home.

His first day home he walked the perimeter of the entire house, up and down a flight of stairs, and all over the furniture without hesitation.  There are a few things I do to keep things simple for Winston like keeping his food, water, and litter box in the same location – moving them really confuses him.  We have also re-arranged some furniture in the basement where he sleeps to make things more convenient for him.

When I am going to pick Winston up I always make some noise or brush his whiskers to let him know what I am about to do.  I also make sure to tell any guests that Winston is blind and explain to them how to best interact with him (some people would shoo him off the couch not realizing he is blind).

Another blind pet I’ve gotten a chance to interact with is Rocket Dog.  Rocket is a 5 year old boxer who is owned by one of our clients.  He was in for an appointment and Dr. Grant said to me “you gotta meet this dog.”  I walked around the front desk and was greeted with a giant boxer kiss.  A moment later I noticed that Rocket didn’t have any eyes.  I had met blind pets, and pets with only one eye, but never one that was missing both eyes!

Rocket was hit by a car when he was two years old and had a bi-lateral enuculation (both eyes surgically removed).  Rocket joined a household of two other boxers and has adapted very well.  His owner uses the scents of different essential oils in different areas of her home to help give him an idea of where he is in the house.  For example, she used eucalyptus in the kitchen and jasmine in the family room.  Rocket’s owner also uses vocal commands in his training such as saying “stairs” just before approaching a staircase so Rocket learns to approach with caution.

At one point Rocket got out of his fenced yard and was missing for three days.  We were all very concerned for his safety.  There were numerous search parties looking for him and finally he was found not too far from his home.  Rocket now wears large, jingly bells on his collar so his owner can locate him easier.

Animals can lose their vision for a number of reasons.  Diseases such glaucoma and cataracts, trauma such as being hit by a car, or congenital defects can all cause or lead to blindness.  Most of our companion animals do fairly well with vision loss.  In some cases vision loss can enhance their other senses, particularly smell and hearing.

As animals age you may begin to see some cloudiness develop in their eyes.  Over time an owner may also notice an animal who is reluctant or hesitant to go down stairs in the dark.  These are both signs of changes in vision and should be discussed with your veterinarian.  For this and many other reasons we like to see your senior pets (dogs and cats over seven years old)  at least twice a year.

Blindness doesn’t mean your pet cannot enjoy the normal things in life.  Most pets do just fine after a short adjustment period.  Just be patient, caring, and accommodating to your pet.  There are many resources on line to help you locate more information blindness in pets.