Pet of the Month 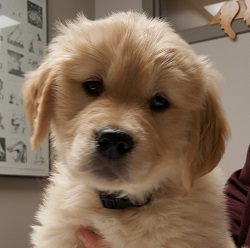 Rico is a sweet one-year old Golden Retriever who belongs to the Potvin family. Rico enjoys playing with his sister, Libby and chewing on sticks and woodchips. He also really loves a good nap!

Rico’s family says he is super smart. As a pup he was potty trained almost immediately and quickly learned to sit nicely for his dinner. Now he is extremely clever in getting what he wants from his sister; be it her bone, toys, or simply her attention! They all love him very much and are very happy he is part of their family. 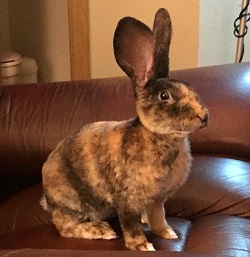 Leonardo Octavius (aka Leo) is a 9-month old Harlequin rabbit who belongs to Jill and Thorton.

Leo enjoys eating, cuddling, and binkies. His owners say he is a true survivor; he started as the runt of his litter and is now the strong bunny you see today!

Jill and Thorton are so happy to have Leo in their life! 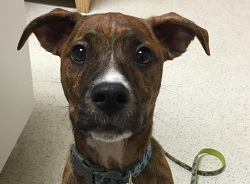 Jax is a two-year-old Pitbull/Rottweiler mix who belongs to Basia. Jax’s favorite activities include destroying dog toys, going for walks, playing at the dog part, and hoarding shoes.

Basia says Jax is very affectionate and supportive. He even helped Basia after she had surgery by snuggling with her during her the recovery and eventually assisting with her rehab! 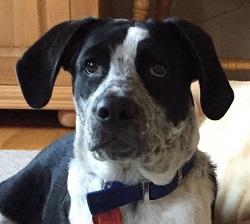 Buddy is an almost three year old Pointer Mix who belongs to Abby and her parents, Paul and Lisa.

Buddy is super sweet and loves walks & playing fetch. His family thinks he is very intelligent, energetic, and the perfect dog for their family! 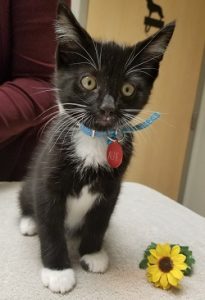 Alfie is a super sweet 6-month old kitten who belongs to Rachel and her family. Alfie was found as a stray and had a cute little stub tail. He was named after the character Alfred in Batman who always wears a tuxedo. Since Alfie’s pattern is tuxedo, it seemed fitting!

Alfie’s favorite activities are running around and being a “crazy kitten.” Rachel and family feel so lucky to have found Alfie and love him very much! 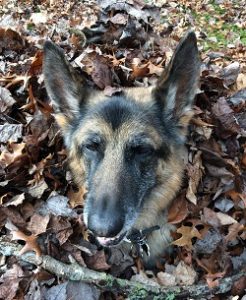 Tasha is a sweet 12 year old German Shepherd loved by her parents Tony and Lisa.

Her life ambition is to become Pet Of The Month at Carver Lake Vet! 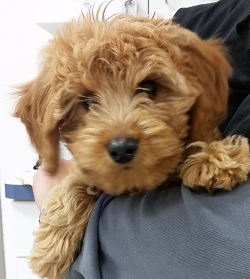 McKenzie is a sweet, 1-year old Goldendoodle who belongs to Addison and her family. We’ve known McKenzie since she was a little pup in our PlayCare program and it’s been so cool to watch her grow up 🙂 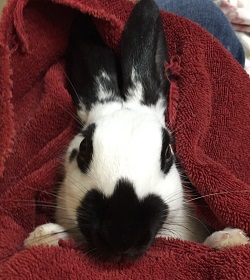 Chamomile (a.k.a. Cami) is a 1-year old English Spot Rabbit who belongs to Deneen.

Cami’s favorite activities include hanging out in the beanbag chair, exercizing in the living room, and playing ball. Deneen says the thing she loves most about Cami is how Cami follows her around everywhere – she calls Cami her “little shadow.” 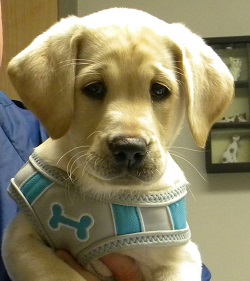 Josie is a super sweet 1-year old yellow lab who loves everyone and everything! Her favorite activities are chasing leaves, carrying big sticks while on walks, playing with her toys, and napping on the couch.

Her family loves her tons and feel so lucky to have such a great pup in their family! 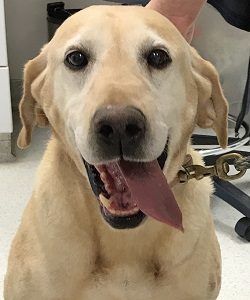 Homer is a 9-year old yellow lab who belongs to Steve. Homer’s very favorite activity is definitely hunting, and he accompanies his owner on many excursions throughout the year.

Steve enjoys this special time with Homer and says in addition to his hunting skills, says that Homer has an extraordinary personality! 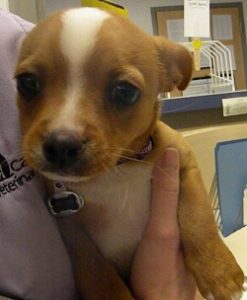 Peyton is a sweet little, 2-year old, Jack Russel-Chihuahua mix who belongs to Jodi and Doug. We’ve known Peyton since he was just a little pup and it’s been fun to watch him grow (although not very big!) over the last two years.

Peyton was adopted as a rescue pup and his owners say it was the best thing they ever did! He is super sweet and enjoys walks, fetch, playing, and snuggling. Peyton is also a die-hard Vikings fan and always come to visit us sporting his team gear! 🙂