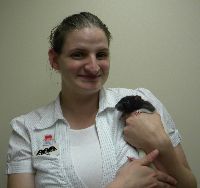 Contrary to popular belief, bats are not really masquerading vampires that fly around at night looking for a human blood meal. I think, however, it is because of that belief inspired by the media that we are so freaked out by them! Well, that and the fact that they fly really fast and make noises that sound like screams. My impression of bats has changed recently but also my need to help others understand them and take care of them properly. I am a little embarrassed by the following story, but hopefully it will aid others in their experiences with these mysterious creatures of the night.

It was about 11:30pm, I had gotten up from my restful slumber to make a trip to the bathroom. In the bathroom I could here what sounded like a little mouse under my sink. I woke up my husband and had him come take a look. We peered cautiously into the cabinet and sure enough, nestled between the q-tips, toilet paper, and many hair products was a small bat.

“You have to get it out tonight! I’ll have to get my hairbrush out in the morning and what if I forget it’s there and open the door and it flies out and gives me rabies!” I told my husband, Chris. Admittedly, I was being a bit dramatic, but having learned all about Rabies at Carver Lake, I felt I had a right to be. Once I calmed down we started to plan a way to get this bat out of our bathroom. We phoned our neighbors to see if they had a couple tennis racquets so we could try to pick the bat up. They had been sleeping as well, but brought their “weapons” over and stayed to take part in the war. Two hours of combat involved tennis racquets, tongs, a bb gun (which was a miserable failure), a hand towel, and a lot of screaming. I might add that the majority of the screaming was done by the men.

Finally, after many failed attempts to remove the bat from the bathroom, it got tired of us and decided to fly out all on its own. Of course, that only made matters worse for us because now she was not in any easy place to catch, but rather flying madly around in every direction of our house, and she was also A LOT larger than she appeared in the bathroom. Each of us was in a different room, poking our nose out the door and yelling at someone else to quit being a baby and do something about it. Finally my neighbor decided to be brave and come in with a tennis racquet. Sorry to say the bat met her end at that point. We said our goodbyes and disposed of her. I looked under my sink, trying to figure out how she ended up under there. It looked like she had managed her way down the inside of the wall and squeezed in where the pipes go in to the wall.

It happens, wild animals come into our lives unexpectedly and most of the time unwanted. It is good to know who to call for capture, transport, and disposal of live and deceased animals. Looking back, our midnight adventure was not the wisest choice of action when dealing with a bat who could potentially carry rabies. What I should have done was to contact my local animal control, wildlife rehab center, or the DNR. When it comes to wild animals, don’t take unnecessary risks. Protect yourself and your families, even the furry ones, from the diseases wild animals can spread. Use proper gloves and handling equipment if you have to handle the animal and make sure your pets are properly vaccinated for rabies and other zoonotic diseases.