All to often cat owners elect not to microchip their cat because they consider them an “indoor only” cat.  Although it is true that cats are safer when they stay indoors, it certainly doesn’t mean that they will never get outdoors or lost.  The story below happened last year and reminds us why it is so very important to microchip every single pet, because you never know what could happen.

In April of last year a client of Carver Lake Veterinary Center found that a stray cat was hanging around their yard and sleeping under their BBQ.  They started feeding the skinny stray male.  Of course this little guy was quite hungary, so he  decided to stay for a while.

Our clients, being attentive feline caregivers themselves, were concerned about the cat’s health.  They could also tell that he had been well cared for at one point, and likely had owners out there missing him.   So, they brought the cat over to our clinic for an exam and to be scanned for a microchip.

This cat was pretty skinny and had some hair loss, but overall he was in good shape.  Most importantly – he had a microchip!  We routinely scan all strays and new pets for microchips for this exact reason.  As you can imagine, our staff was jumping for joy when we realized we could help him find his family.

We contacted the microchip’s national database and they promptly gave us the registered owners contact information.  We immediately phoned the owenrs to tell them the news that their cat “Billi” was safe and sound. 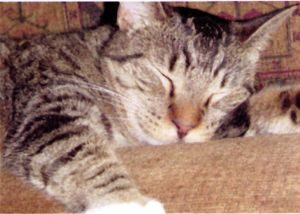 We then learned that his owners had been taking their thrash when Billi slipped out the back door.  Frightened, he ran off and was unable to be found.  Fliers and pictures were posted in his neighborhood, but there was no response.  They also contacted local shelters and vet clinics without any luck.  Billi’s owners feared they would never see their beloved cat again.

Billi was lost on January 27th in Richfield and was recovered in early April in Woodbury!  Only Billi knows what happened during that time – and how he crossed the river!  This story is precisely the reason we recommend microchipping every pet, regardless of their lifestyle.  During hurricane Katrina, most of the pets that were reunited with their owners had microchips.

We carry microchips at our clinic and can implant them at any time.  The microchip itself is about the size of a grain of rice.  It is implanted using a needle and it goes under your pet’s skin between their shoulder blades (similar to how we give vaccines).

Once microchipped, you and your pets information will be entered into a national database.  Veterinary Clinics and shelters all have microchip scanners and will contact the database anytime an animal with a microchip comes into their care.

We were so excited to be part of this reunion of lost pet and owner.  We recommend microchipping as part of every pet’s routine care.  Please call us today to schedule your appointment and spread the word that microchips are a must!!!