Every dog has a story – my dog Koby certainly has an interesting one of his own.  His story begins February of 2003.  My husband and I had been thinking about getting a dog.  We had searched shelters, and looked at rescues, but no dog was quite right.

Then one morning a Golden Retriever named Koby came to Carver Lake.  He was in pretty sad shape having been hit by a car.  Although he had no home, and a broken leg, he never stopped wagging his tail.  I fell in love instantly.

Surgery was done to repair his broken leg, and his life as part of my family began.  For the next month we got to know each other as he healed and continued to grow at the amazing pace that puppies do.  But, after a month of healing it became obvious that Koby was having problems with his previously broken leg.

One of the two bones in his leg was not growing properly.  We were faced with a very difficult decsion.  Perform yet another surgery with an even longer recovery time, or amputate the leg and get rid of the problem entirely.  It was the most difficult decision of my life.  After a lot of thought, and  many tear filled discussions, my husband and I elected to amputate his leg.  He was just a puppy and we didn’t want to put him through another surgery that wasn’t guaranteed to work.

The morning of Koby’s amputation we left him in the care of the amazing doctors here and waited.  We took Koby home that evening and kept him heavily sedated and on plenty of pain medication.  He stayed very quiet and did not move much at all.

My husband and I spent most of the night worrying that we had made the wrong decision.  The next morning as the sedatives wore off and Koby started to wake, Dr. Grant came over to help us get him ready for the next stage of recovery.

We carried our newly 3-legged dog outside and stood him up to see how he did. He started to tip a little at first and then he moved his remaining front leg into the middle and proceeded to hop about the yard and sniff just as he always had.  To our amazement he even hopped up the stairs to get back inside without hesitation.  It was at that moment that we knew we had made the right decision.

The next few months of recovery flew by and soon our little puppy was all grown up and just as crazy as any 4-legged dog…in fact maybe even a little crazier!

Koby is now 4 years old and as happy as ever.  He is a professional tennis ball fetcher, he swims better and faster than most 4-legged dogs I know, holds his own at the dog park, and even tried his hand at agility!  I don’t think Koby has any idea that he is different than other dogs.

Although Koby doesn’t realize he is any different, there are a few extra things that my husband and I do to help keep him healthy.  We started him on a joint supplement and keep him very lean in order to prevent early arthritis.  We keep his nails and the fur on the bottom of his feet trimmed so he has good traction.  And, we never throw his tennis balls in the air – we don’t want him jumping and injuring his remaining legs. 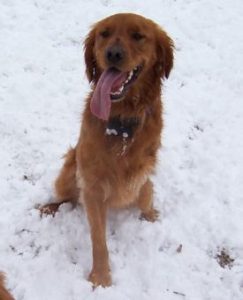 Beyond those few extra things we have found that Koby is really no different than any other dog – in fact having only one front leg doesn’t even keep him from digging!  He never ceases to amaze us.

Koby has been an inspiration to us and those around him.  He didn’t let his “disability” stop him from doing anything his little doggy heart desired.  We could all learn a lot from his amazing positive outlook on life.  Although it was a difficult first couple months, I am so glad that Koby found his way into our lives.  People always say that Koby was lucky to find a family like us.  I disagree…it was my family that was lucky to find a dog like Koby.