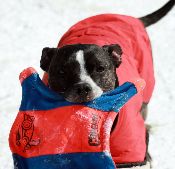 On May 4th, Dr. Hunter and her husband, along with countless friends, said a final goodbye to their beloved dog Ansel.  He was over 13 years old and suffering from a progressive loss of muscle strength which took from him the ability to continue a normal, happy life.

The following are exerpts from Dr. Hunter’s farewell memorial to Ansel…

“Ansel was adopted by us from the Animal Humane Society. He had been found as a stray in St Paul and had been returned after one adoption after chewing up everything in the family’s house. We were attracted to his sweet face and his beautiful brindle coat. We took him for a walk outside the shelter where he picked up a stick and laid down on the ground at our feet and contentedly chewed the stick.

As expected for a dog owned by Kate An, he immediately began training. Ansel loved classes of any type. He earned a Canine Good Citizen and CD and CDX degrees in obedience. Agility was his forte- his speed and grace made running with him a real joy and he had many admirers among the spectators. In his later years he came to love K9 nosework, preferring to pick up the source tin rather than the associated treat. He was a natural athlete and a perfect team mate; in his first competitions in both Rally and Musical Freestyle, he excelled and completed certificates. Two weeks prior to his passing, Ansel made a strong impression at a musical freestyle workshop, his attention, grace and willingness defying anyone’s assumptions based on his breed or age.

Although generally quiet and shy, Ansel did much in the way of public relations and education. He accompanied Kate An in teaching a wide range of students, from kindergarten to college, about safety with dogs, being a veterinarian and the special place of dogs in our lives. He often assisted in showing clients how to work with their own dogs for such things as brushing teeth, getting injections, or taking pills. He also entertained children with a game of fetch in the clinic hallway, or provided much needed hugs and kisses to bereaved clients.

Ansel’s impact reached many through the media. He was a regular guest with Kate An on Gary’s Eichten’s Midday show on Minnesota Public Radio. While Kate An answered callers’ pet care questions, Ansel scouted for treats and occasionally added his own opinion. He and Kate An appeared regularly on The Dog Show with Jazz, on local cable stations, providing pets owners with information on taking the best care of their pets.

In February of 2012, Ansel was inducted into the Minnesota Veterinary Medical Associations Animal Hall of Fame, recognizing the many contributions he has made to the enjoyment and education of dog lovers in Minnesota.

We are grateful to have had Ansel in our lives for so long. Despite a few bumps in the road, (dogs will be dogs), he has been a perfect companion, a willing and talented partner, a gentle teacher. We knew it would be time to say goodbye to Ansel when he could no longer trot- that light, airy gait that has taken him through his life. We now imagine him trotting with his usual joy and grace among the stars.

Thank you to all of you who have been a part of Ansel’s life; who have witnessed, celebrated, taught, loved and shared our beloved boy.

If you would like to, memorial donations can be made to
Minnesota Veterinary Medical Foundation or A Rotta Love Plus