If you caught last month’s installment of my research pursuits (genetic studies of canine mammary cancer), then I’m sure you are anxiously awaiting this sequel – my other research project, which is examining the genetic component of canine epilepsy.

Let’s start with a definition of what epilepsy is and why we’re studying it in a genetics laboratory.  Epilepsy in dogs is not so different from epilepsy in humans – it is a disorder of the nervous system, characterized by focal or generalized seizures or convulsions, with or without the loss of consciousness.

Some seizures, called absence seizures, have just a small amount of muscle twitching with the dog becoming vacant and unresponsive for a short period of time.  Watching your beloved pet go through a seizure can be a frightening experience, and certainly one we would like to avoid. 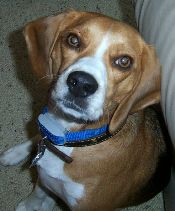 Just like in humans, there are many causes for seizures in dogs.  These include hypoglycemia (low blood sugar – can result from numerous things), hepatic encephalopathy (brain and nervous system damage that occurs as a complication of liver disorders), hypoxia (lack of oxygen to the tissues, particularly the brain – can result from numerous things, kidney failure, intestinal parasites, toxicities (such as lead, mercury, and strychnine), inflammatory causes (viral, fungal, protozoal, bacterial, etc.) cancers of the nervous system, developmental malformations and trauma.  That’s quite a list – are there are many more causes not included above!

Dogs that are diagnosed with idiopathic epilepsy typically are between the ages of six months and five years of age when they have their first seizure (younger or older than that at the time of first seizure suggests a non-genetic cause).  We consider this to be a genetic condition because there is no other identifiable cause and because we can see it being inherited through families and pedigrees.  Numerous mutated genes have already been identified to cause inherited epilepsy in humans.

We think that there is a mutation or genetic alteration which predisposes these dogs to seizures by lowering the “seizure threshold.”  In other words, where a normal dog would require a potent stimulus to induce a seizure (for example, an electric shock), these dogs have a very low thresh-hold for a seizure, requiring minimal or no stimuli at all to induce a seizure.

There are some breeds which have been specifically identified to have this inherited form of epilepsy, including Beagles, Vizslas, Greater Swiss Mountain Dogs, and English Springer Spaniels.  These are the breeds that I am focusing on in my research, as we search for a gene that might be mutated, causing a lowering of the seizure threshold in these dogs.

We are using several genetic tools and types of studies to approach this disease problem from different angles, but, similar to what I wrote last month, in order to conduct these genetic studies, we need DNA samples from both affected (dogs diagnosed with idiopathic epilepsy) and control (unaffected or non-epileptic) purebred dogs from the four breeds previously listed.  All we collect from the dogs is a blood sample, since we can get DNA from the white blood cells that circulate in the blood.  Additionally, we ask for information about the dog’s seizures (if he or she is affected) and a copy of the dog’s pedigree.

If we eventually determine that there is an underlying genetic mutation that predisposes Beagles, Vizslas, Greater Swiss Mountain Dogs, and/or English Springer Spaniels to epilepsy (they may not be the same for each breed), then perhaps we will also be able to develop a genetic test to determine if a dog carries the mutation.  This information will help guide breeders to make informed decisions about which dogs to mate, selecting against any mutations and hopefully producing puppies that will not grow to develop epilepsy.

So,that concludes the second installment of what I am doing during the day when I am not working at Carver Lake.  If you have any questions about my research, or if you are interested in enrolling your purebred Beagle, Vizsla, Greater Swiss Mountain Dog, or English Springer Spaniel in this study please contact me (Dr. Kari Ekenstedt) at Carver Lake Veterinary Center or directly at my lab at the University of Minnesota, 612-624-5322.