The following was written by one of our clients, Heather Gillen. Therapy dogs have touched her family in a profound way, and she was kind enough to share the story with us.

Three years ago we had the experience of being a long time patient at the Children’s Hospitals of Minnesota, St. Paul location. Between the months of November 2008 and January 2009 we spent 49 days at the hospital with our daughter. Although it is not a time we like to re-live in our minds, we feel compelled to share with you some of the great things that have come out of our experience there.

For ten full years my sweet, caring, and active daughter experienced complete health. In the fall of 2008 she began experiencing upper leg pain and extreme tiredness. At first it was thought that she had a mono type virus and things would get better with time. That did not happen and as things progressively got worse, she was sent to St. Paul Children’s for additional testing.

To make a long story short, it was determined that she has a disease called Juvenile Dermatomyositis. It is an auto-immune disease that only affects 3000 – 5000 children in the US each year. With this disease, your body thinks there is a virus present and reacts to fight it off. The problem is that no virus exists, and your own immune system begins to attack the muscles and tissues of your body instead. At one point her muscles became so inflamed that she could not lift her head off of a pillow, she could not stand, walk, and could barely talk. Her core body began shutting down; it affected her kidneys, colon, lungs and throat. She ended up having a feeding tube to eat and many tests and procedures. It was a scary time for her and our entire family! We were told that her life was in jeopardy and that is something you never want to hear as a parent.

The reason that I am sharing her story with you today is to highlight one of the innovative therapies Children’s Hospitals of MN is using in there Occupational Therapy Program.

Children’s St. Paul has a fabulous volunteer team of many therapy dogs and their owners (8 that we counted during our stay) and I think we met all of them while we were there for the 49 days. We also ran into an angel named Nicole Lindstrom who works in the OT department. Nicole is an Occupational Therapist who works with inpatients and outpatients at Children’s Hospital.

Please understand that when we first met Nicole, things were not so rosy. She was there to move my daughters muscles and body at a time when she could not do so herself. Ally’s muscles were so inflamed that each movement caused extreme pain and she really wanted nothing to do with Nicole. She would scream, cry and pout each time she entered the room.

Nicole quickly keyed in on something that my daughter often talked about, our dog. Nicole was able to combine my daughter’s love of dogs with her therapy for a recipe of complete success!

After laying for so long and not using all of her muscles my daughter had to re-learn many skills. On a daily basis Nicole would visit our hospital room, often times with a couple of visitors in tow. These visitors were the wonderful volunteer teams of therapy dogs and their owners.

As my daughter started to regain some strength, Nicole, would often bring Jenny (a therapy dog owner) and Karlos (an Italian Greyhound) to work on daily life skills. At first my daughter would spend hours just petting Karlos and having him lay by her for comfort (that was all her muscles would allow her to do). During those times they would strategically move Karlos around the bed so my daughter would use her arms in different positions. She did move her arms and did so for much longer than she ever would have on her own. Her range of motion began improving.

She missed our own dog from home and after many days the comfort that Karlos provided was nothing short of amazing. I would see her go from a scared child to one who was at peace just by having a dog by her side.

As things progressed she was able to try more advanced activities, she would sometimes brush the dog’s fur, one day she even got to paint Karlos toe nails (working on her fine motor skills). Then the fun began with all the great outfits that Jenny would bring for Karlos to wear. They would spend complete sessions dressing Karlos, working on buckles and straps, with my daughter never knowing just how hard she was working or what she was relearning, she was having so much fun and was making great progress! 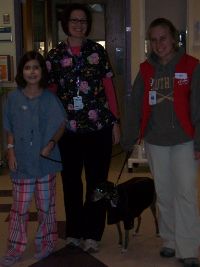 Some days Nicole would have bigger dogs come and visit and they would play tic-tac-toe on the dogs back as she sat on the side of the bed and reached for the right placement (practicing balance and muscle control). Each day was a new adventure and she looked forward to what the next visit would hold. As the medicines began working in her body and she began gaining greater strength, she started going on walks around the units with the dogs on their leashes. She would go much farther than she ever would have on her own when the dogs were present and all with a smile on her face!

The dogs brought such comfort, joy and motivation. I do not know what we would have done without them or how far she would have progressed but I do know that they made a HUGE difference in the life of my daughter and many other who have been and are at Children’s St. Paul today!

The smiles that the dogs and owners bring to the faces of the children there are priceless! Those smiles are often few and far between when children are receiving treatments and everything seems so scary.

The creative ways that Nicole was able to integrate the OT therapy principles with the dogs was amazing! We would have never known about such a therapy without going through this process and wish we would have known more about it earlier. You never want to experience such an event in the life of your child, but if you do, Children’s St. Paul is the place to be!

As my daughter continued with her therapies on an outpatient basis and worked to find her “new normal”, Nicole, Jenny and Karlos continued to work with her on a weekly basis. That continuity of care and the anticipation of seeing them each week meant more than any parent could ask for. There was never a time that I had to encourage my daughter to go to therapy; she anxiously waited each OT therapy day to come.

Before this journey began, Ally never even knew what OT or Animal AssistedTherapy was. Today she has been inspired and says that she someday hopes to become an OT herself so she can work with kids and dogs and help make them happy and healthy!

As of March of 2011, we have another success to report. Our own dog Angel (a Cavachon) passed her Delta Therapy Dog Certification and is now an official therapy dog! Angel and I visit Children’s Hospital every Tuesday as a part of their Therapy Dog Volunteer Program! We love making a difference for the kids there as so many wonderful people and animals had done for us! I wish more health care facilities would know about the amazing healing powers of therapy dogs! Each week I see firsthand how they provide distraction, comfort, smiles, healing and motivation. As a parent I wish I would have known about this amazing alternative therapy before we were faced with one of the hardest challenges in our life!

P.S. My Daughter cannot wait until she turns 14 years old (the age you can volunteer at Children’s Hospital) so she can volunteer with Angel and make a difference for the kids there!